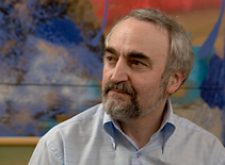 Honorary Academician of Russian Academy of Arts
Hadji-Murad Alikhanov was born in Dagestan village Mekegi in 1948.
He graduated first from Dagestan Art College in 1968 and then with honors in 1977 from the Leningrad State Institute of Theatre, Music and Cinematography. He joined the Union of Artists of the USSR in 1981 and later in 2009 was selected an Honorary Member of the Russian Academy of Arts.
At present, he lives and works in Moscow.

A Woman of my Imagination