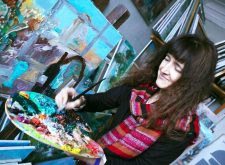 Vera Elnitskaya was born in Moscow, Russia, in 1966. She studied painting at an art school, did a great deal of drawing and painting from life, traveled with groups of artists to different parts of Russia and participated in group exhibitions of their works. In 1990, Vera Elnitskaya produced a series of landscape paintings for which she was awarded 1st prize in a competition among young Moscow artists.
In 1990-91, Vera Elnitskaya was a member of the “SENEZH” art group. In 1991, she joined the Moscow Artists’ Union (MAU). In 1993, she spent six months in Ottawa, Canada, during which period she attended drawing classes at the Ottawa School of Art.
Vera Elnitskaya exhibited her works at art galleries in Moscow: “Expo-88”, “Manezh”, “Les Oreades”, “M’ARS”. In 1997, she had a personal exhibition in Tallinn. In 1999, she traveled to Italy and had a personal exhibition in San Pietro in Casale. In 2003, she worked at La Cite Internationale des Arts, Paris, and produced a series of paintings of that city. In 2003-2005, Vera Elnitskaya attended exhibitions and lectures at the Centre of Modern Art in Moscow and produced some works in the field of photography and abstract art. In 2005, she took part in an exhibition at the Zverev Centre of Contemporary Art, Moscow. In 2006, she participated in the “Arte e cultura dalla Russia” exhibition during the Russian Art Festival in Viterbo, Italy.
Vera Elnitskaya’s works are to be found in the personal collections of M. Alshibai, I. Golman, A. Zaripov, A. Mironov, O. Kuzin, D. Toloknov, A. Khazieva – Moscow; R. Guerra, E.Rosenfeld – Paris; P. Selmi – Italy; B. Gelbman – Canada; Fernando M. Valensuela – Spain; and in the art museums of Sochi, Ustiuzhna, Bendery ans Pereyaslavl-Zalesski.
In 2014, fourteen of Vera Elnitskaya’s works were included in the City of Ottawa Art Collection.

Variations on a Jazz Theme