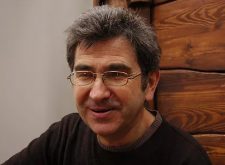 He studied at the art school, then at the Higher Art School named after Vera Muhina (Academy named after A. Stieglitz, St. Petersburg ) . He graduated from the State Art Institute of the Estonian Soviet Union, Department of Ceramics and Glass (Tallinn , 1979) .
Member of the Moscow Union of Artists since 1983 , the Union of Designers .

The works presented in the collections of museums: All-Russian Museum of  Decorative Art (Moscow ) , the International Centre for Ceramics (South Korea ) .

Awards: Diplomas of the first and second biennial International Ceramics Exhibition, Seoul, South Korea (2001,2003), First Prize of the exhibition “Landscape and Design”, Moscow (2008), the Prize of the Union of Designers “For high design”, Moscow (2006, 2008), Diploma of the Moscow Union of artists of the decorative composition “Aloe”, the exhibition “Moscow’s Decorative art” (2008).