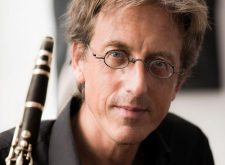 Amsterdam based clarinetist Michel Marang studied with Walter Boeykens and finished conservatory cum laude in 1987, the same year in which he also got his degree in philosophy at Amsterdam University. Hereafter he studied with Hans Deinzer (Germany) and took master classes with Roger Heaton (England) and Susan Stephens (USA).
Apart from his interest and activities in classical music, theatre, and world-music, Marang specializes in contemporary music. He collaborated with many composers, including Olivier Messiaen, Morton Feldman, Edison Denisov and Karlheinz Stockhausen. With the latter he studied his monumental ‘Harlequin’, a 45 minute solo for a dancing and miming clarinetist. In addition, Marang wrote music for several theatre productions, such as “Nicky Somewhere Else”, which was very successful on Broadway.
He was a member, guest and/or soloist with all the leading new music ensembles in Holland, as well as Musikfabrik in Cologne, Contrechamps in Geneva, Aleph in Paris and Studio New Music in Moscow.
As a soloist, Michel Marang performed throughout Europe, the USA, Mexico, Russia, Ukraine, Estonia, India, and the Middle-East. He gave seminars at several leading institutions, including the Moscow Conservatory.
Besides, Marang works hard as a photographer. He won several prizes for his work, among others for his triptychs and abstract work. Furthermore he concentrates on portrait photography, and projects combining photography and (electronic) music.
His work was published in magazines in Holland, Germany and China. Exhibitions took place in Holland, Belgium, France and New York.
From the reviews:
…a talented, sensitive player… (The New York Times)
…lyric and grand manner in the Amsterdam concertgebouw… (de Volkskrant)
…in every respect phenomenal… (Frankfurter Rundschau)
…a magnificent performance… (Moscow news)
…a convincing actor… (Trouw)
…he doesn’t play his instrument, he is his instrument…it isn’t sheer music, but life itself…
(Brabants Dagblad)