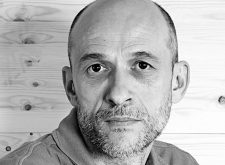 Peldyakov Vladimir was born in 1970 in Ulyanovsk.
1990 – graduated from the Sculpture Department of Art and Crafts Industrial Technical School named after M.I. Kalinin.
1992–2000 – lived in Western Siberia, worked as a teacher in the Art Department of the School of Arts.
2000 – moved to Moscow. Works at the Rodchenko Art School, Moscow.
He works in small sculptural forms, photography and video.

Vibrations of the Earth