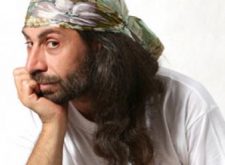 Suren Ayvazian was born in Moscow in 1958.
1983 – Moscow State Pedagogical University (previously known as the Moscow State V.I. Lenin Pedagogical Institute), the Graphic Art Faculty
1985 – worked in Art Restoration Studios in Veliky Novgorod
1986 – 1989 – in Gorny Altai as a forester
Since 1999 he has taken part in the “Art Manege” Moscow Art Fair every year
2003 – presented for the first time his project “The Secret Society of Total Greening” – a society that has united artists, designers, collectors and art lovers in a passion for landscaping and greening around the world.

His works have been exhibited in Germany, Switzerland, Israel, India, Nepal, the USA and Armenia where they are very popular among private collectors.

Vibrations of the Earth

The Call of Ancient Armenia