East Meets West Gallery is proud to present an exhibition, entitled “Organic and Non-Organic Structures”.  The exhibit will run from November 27, 2019 to December 26, 2019 at the Design Center ARTPLAY. 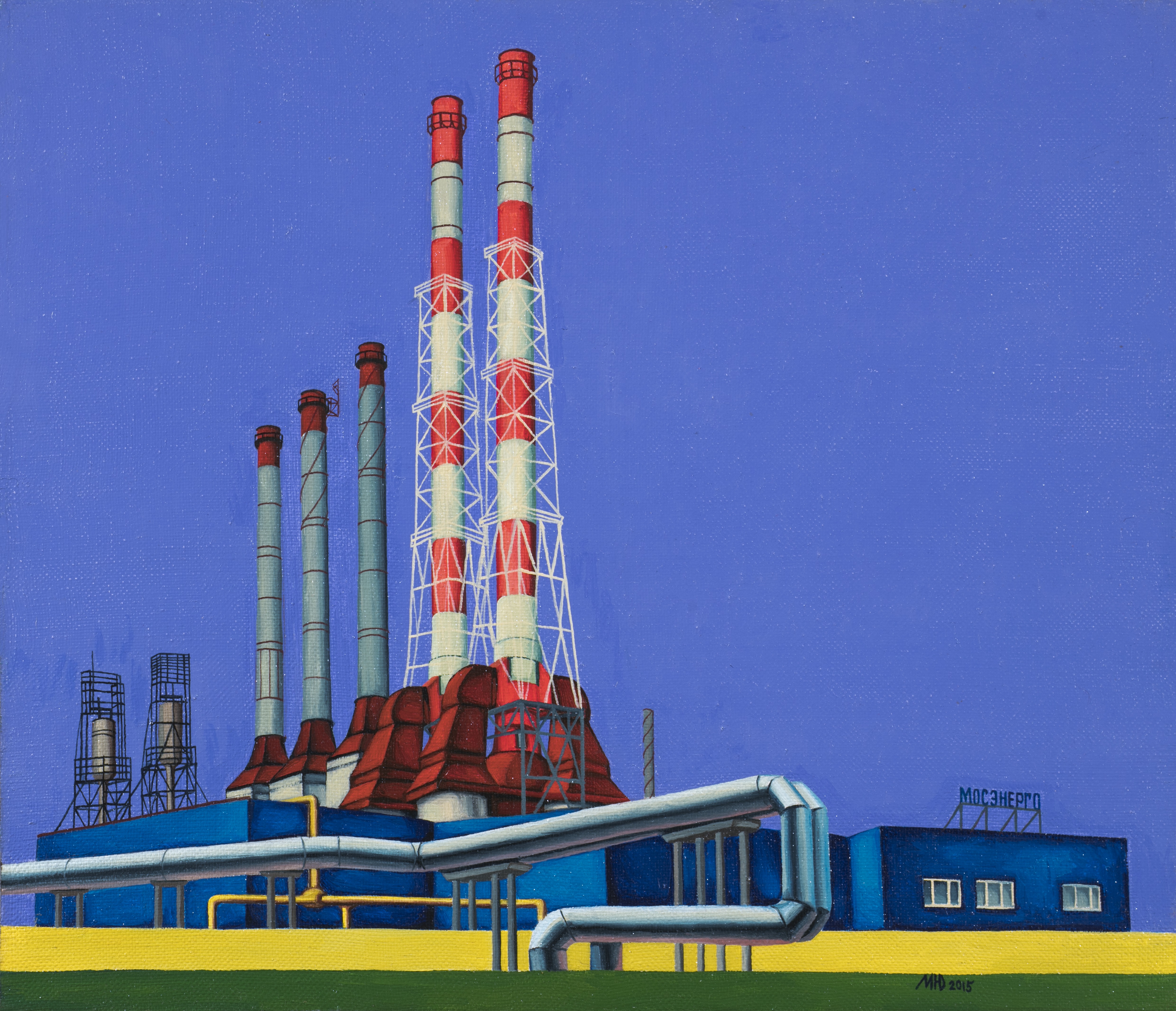 From November 27 to December 26, 2019, the East Meets West Gallery will host a series of exhibits under the general title “Organic and Non-Organic Nature” at the ARTPLAY Design Center in Moscow.

We first introduced this topic in our 20th anniversary exhibit “Between Heaven and Earth, Part II”, which finished recently at the All-Russian Museum of Decorative Art. The new exhibit is called “Organic and Non-Organic Structures”, and includes graphic and canvas works by Moscow artists Julia Malinina and Ilya Seregin as well as sculptures by Maria Kalmykova and Maxim Protsenko. These artists attempt to go beyond figurative and thematic representations, and approach a philosophical generalization by eliminating small details and unnecessary layers, adopting an almost “bare” construction on the way to conceptual ideas.

Julia Malinina is a graphic artist who draws thorough details of an object in space. Her early graphic sketches only hinted at a future focus on factory architecture, but they already revealed her major interest in the clean design and shape of an object rather than surrounding details or color shades. The structural basis of her works – architectural forms, and especially of the post-industrial era – carries not only symbolic meaning but can also reach the level of epic generalization, as for example in the works “My Beautiful Castle” (2017) or “Empty” (2016).

The post-industrial era debunked the dreams of earlier 20th-central modernist industrial architecture regarding the paramount importance of the industrial revolution in the development of the mankind, and Julia’s polyptych “Requiem” (2017) is dedicated to this theme. On the one hand she conveys nostalgia and sadness that huge industrial objects have lost their functionality, while on the other she also welcomes their transition to the rank of monuments comparable to museums.

Ilya Seregin uses a very selective color palette in his works. The relationship between the artist and the world and the philosophical moment of generalization is mostly revealed in composition, for example in his work “Poplar M” (2018). This structure of landscapes is “cleaned” by the artist to the point of abstraction in order to better express one conceptual idea. Choosing nature as his main theme, Ilya remains within the style of minimalism.

In recent years, however, his restrained, earthy palette has been increasingly supplemented by bright colors, symbolizing an optimistic attitude towards life. In his latest graphic and canvas works the visual geometry has become more diverse, and his experiments are especially interesting. For a large monumental painting he chooses cardboard or wood rather than canvas, for example in his works “Untitled” (2016) and “Cottage Village” (2016). He can also attribute an almost intimate figurative picture with the epic and generalizing principles, such as in the landscape “Spruce and Birches” (2017) or “Autumn II” (2017).

These ideas are clearly expressed as well in the pieces by Maria Kalmykova and Maxim Protsenko. When they felt trapped within the framework of traditional sculptural materials, they turned to wood waste, stones, metal rods, nails and various other recycled materials. Maria and Maxim’s “live” objects have a clear constructive basis. The simplicity of their form, structural organization, and their use of natural materials make it possible to call it ecological architecture, such as for example “Fish” (2009), “Hedgehog with Citrus” (2007) by Kalmykova and “Praryba” (2017) by Protsenko. 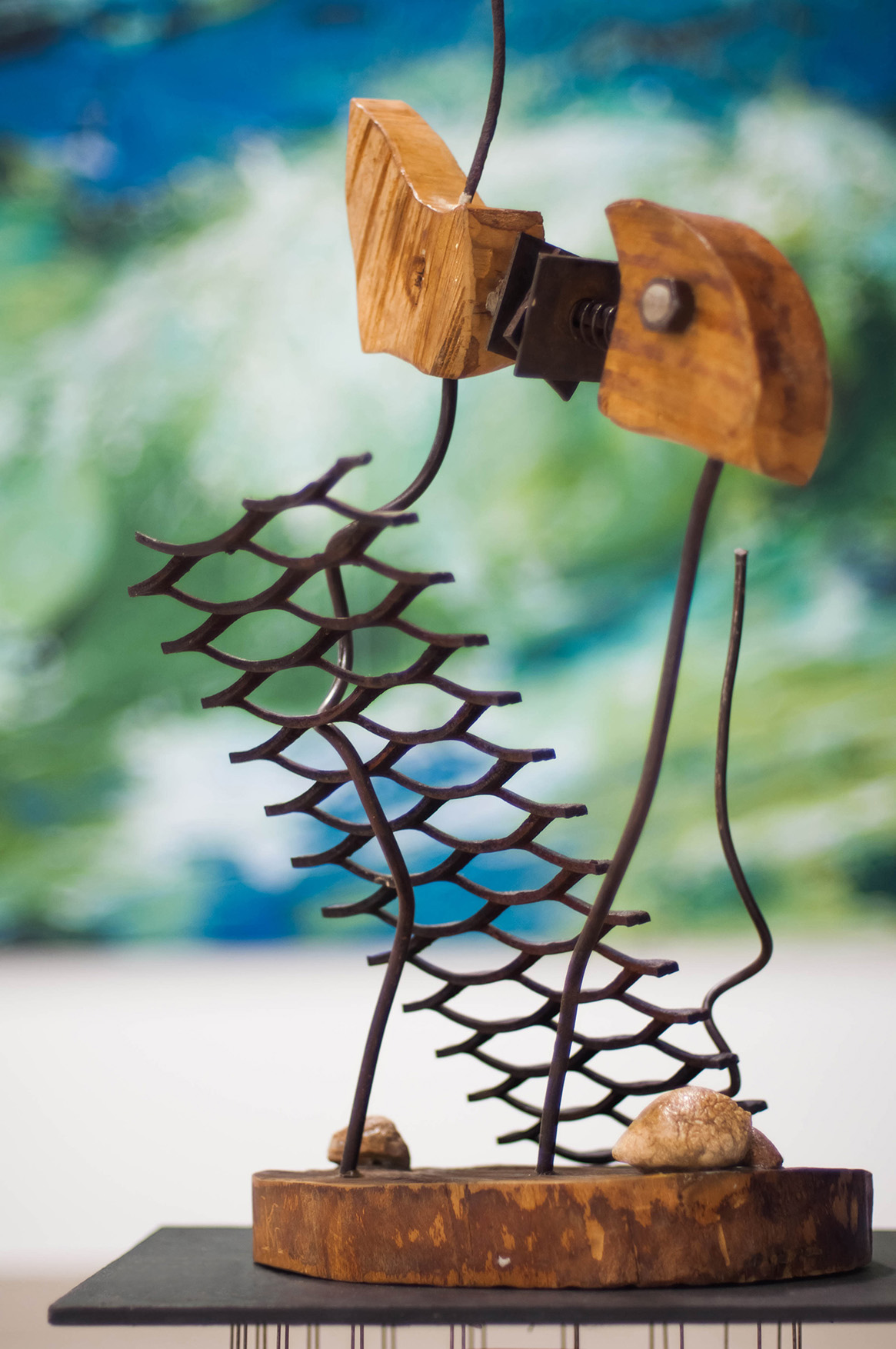 Maxim Protsenko often plays the game of highlighting contradictions between the image of the object and the material from which it is made. This can be seen in his works “Beetle” (2018) and “Overgrowth” (2019). Maria Kalmykova’s scuptures, meanwhile, lean towards more generalized, symbolic meaning rather than realistic images, as for example in the work “Fish” (2009).

This design-oriented and structural approach to images is also implemented by the artists in  joint works. According to Maria, “It’s extremely interesting for me to work together with Maxim, since each of us contributes to the creation of a common work …. The works we have done together are signed by M + M, which creates a playful tone.”

The exhibit runs at the ARTPLAY Design Center from November 27 to December 26, 2019.